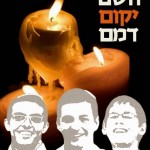 More than 1,000 people attended a memorial ceremony on Monday in the Judea and Samaria community of Talmon that marked one year since Israeli teenagers Gilad Shaar, Naftali Frenkel, and Eyal Yifrach were kidnapped and murdered by Hamas terrorists in an incident that sparked last summer’s Gaza conflict.

Though the three boys are believed to have been murdered on the day of their abduction, their bodies were not found until 18 days later. Among those present at the ceremony were members of the search teams who looked for the boys as well as the special Israel Defense Forces unit that assisted the families during the search last summer.

Friends, relatives, and youth group leaders spoke about their memories of the boys.

“Exactly one year ago, I opened a new file on my computer and named it, ‘Waiting for Gil-adush,’” said Bat-Galim Shaar, using an affectionate nickname for her late son. “Since then, the file has filled up, and, in a way, our lives emptied.”

On Wednesday, June 3, Israelis will mark the first “Unity Day,” an initiative to bridge gaps and encourage tolerance in Israeli society and in Jewish communities abroad, created by the murdered boys’ bereaved parents, Israel’s Education Ministry, the Jerusalem municipality, and the Gesher non-profit.