New York Governor Andrew Cuomo, once known as a fairly conservative Democrat, has run full speed ahead into the winds of the far-left, “progressive” agenda. After being accused by gubernatorial challenger Cynthia Nixon of not being sufficiently progressive, Cuomo appears to be seeking to outdo New York City Mayor Bill de Blasio, whose ultra-progressive agenda is totally destroying the city. (Please see here, and – if you have a tough stomach –  this new article is an absolute must-read as well.)

For decades, New York State allowed abortion until 24 weeks of pregnancy, and only when performed by a physician. Abortions performed in violation of the law were subject to criminal prosecution. As of this week, under Governor Cuomo’s brand-new Reproductive Health Act, late-term abortions may be performed literally until right before birth and even by non-doctors, and not only in order to save the mother’s life but also “to protect a patient’s health” – something defined quite broadly by the law’s own language, which endorses abortions at will, for no health reason whatsoever. (“Every individual who becomes pregnant has the fundamental right to choose to carry the pregnancy to term, to give birth to a child, or to have an abortion, pursuant to this article”). Furthermore, abortion performed in violation of the law (although it is hard to imagine that any abortions will now be illegal) has been removed from the New York State Criminal Code.

Decriminalizing illegal abortion is not a mere abstract formality. To quote one prominent news source:

Livia Abreu of the Bronx lost her baby in a 2018 domestic violence attack. Charges against her ex-boyfriend, Oscar Alvarez, include abortion in the first degree.

“The passing of RHA will exonerate him from those charges. I cannot imagine living in a world where harming or killing an unborn child is not a crime,” Abreu said.

New York State’s Reproductive Health Act, under the guise of progressiveness and liberality, is in truth a regressive act of intolerance toward the state’s religious communities. By sanctioning abortions literally until a moment prior to birth, in deference to women’s “right to choose”, and by decriminalizing illegal abortions, Governor Cuomo and his political allies have declared war on human life, which is a reflection of God’s image. This brazen offense to Biblical law and values and to the millions of New Yorkers who object to the Reproductive Health Act’s radical message speaks volumes about the state government’s respect for faith and human life.

The hypocrisy is biting. Progressive politics is used to serve special, liberal interests, whereas the sensitivities of large religious constituencies in the state who oppose this new law are trampled upon without comment.

But worse is the offense to Biblical morality, which protects the unborn. New York State has in effect asserted that a woman’s convenience and whim are more important than taking the life of another. Have any of the politicians who supported this law ever really thought about this, or have they brushed this concern under the carpet in their idolatrous quest to satisfy every senseless progressive goal?

But let us go a bit deeper. It is not only Cuomo and his allies who are to blame for this unprecedented assault on religion. In fact, the blame in large measure lies on the religious communities themselves.

With the glaring exception of Brooklyn New York State Senator Simcha Felder, who votes Republican in line with his district’s Orthodox Jewish constituency, other regions of the state which are comprised of religious communities are frequently represented by liberal Democrats (!). A quick look at New York State’s legislative districts and their elected representatives underscores this fact, which is a given for us New Yorkers. For whatever (insane) reason, most New Yorkers continue by rote to elect liberal Democrats, irrespective of the Democratic candidates’ values. Case in point: Even the vile socialist Alexandria Ocasio-Cortez hails from a heavily Catholic district (New York’s District 14); although the district is not overwhelmingly religious, it has heavy pockets of regular worshippers in its quite numerous houses of prayer, as well as those who take their religion in general very seriously. So too for the so many other New York districts, comprised of various religious communities, that are woefully represented by progressive Democrats.

It is time for people of religious conviction to take their conviction to the poll booths and make seismic political change. Rather than voting by rote, religious people must start to vote with their minds and hearts. Otherwise, they can only blame themselves for the retched results of the progressive political machine. In the case at hand, it is a documented fact that the Reproductive Health Act was passed by the votes of Democrats from religious-oriented districts.

We conclude with the words of one of American Jewry’s greatest sages, Rabbi Joseph B. Soloveitchik, who stated concerning abortion:

“If the sinfulness of murder were only a result of our moral judgment, then why not permit abortions? As a matter of fact, it happens in modern society. Abortion is murder according to Jewish Law. The fetus is alive. The liberals of today don’t like that position.  The liberals of today have simply lost the criterion of morality, what is moral and what is immoral; they are absolutely confused and perplexed.

“A fertilized ovum, after it has lived for forty or fifty days, is a living organism. Potentially, it has everything that a human being at the age of forty possesses… But if human conscience is the judge, then of course inconvenience on the part of the mother is more important than the extinction of life. The human psyche does not find abortion as repugnant as the killing of a child. But if the Almighty is the judge, we refrain from murder not because the act is abominable, but because we abide by His Will, then abortion is murder.

“If murder is based solely on moral reasonableness and sensitivity, then why not allow euthanasia? Left to its own conscience, society, little by little, simply destroys the very fabric of its morality. Why not kill a person who is suffering from an incurable disease? If euthanasia is permitted, then the road to murder is open.

“Rabbi Akiva maintained that man must not rely solely on his own morals and sensitivities, even pertaining to religious commandments whose moral message we feel that we understand. Certain areas are not accessible to human moral exploration and illumination…

“That is the basic reason why secular ethics has failed. Because the element of adherence to an objective Divine Command is not comprehensible to secular man. When everything is reduced to religious commandments whose moral message we feel that we understand, there (in truth) is no morality.”

“I can never predict what modern society will come up with. Everything is possible. The most abnormal, obnoxious, repellent ideas may be introduced in the form of legislation to Congress. And now, since it is modern to be liberal, it’s quite in vogue to be heretical, so any law can be adopted. The Supreme Court in America is the most unpredictable body. Did you see, did you read carefully, the decision about abortion? (Roe vs. Wade)…

“That is why I cannot understand it, I cannot grasp it, to me it is something vulgar, this clamor of the liberals that abortion be permitted. It’s not a clamor anymore – it’s a legislated fact.

“How can a mother kill her baby? I can’t understand it, I cannot grasp it…

“I consider the society of today as insane. Not sick, but insane… If you kill the fetus, a time will come when even infants will be killed. The mother will get frightened after the baby will be born. Usually the mother expresses certain stages of depression after the birth of a baby. So she comes to the doctor, a psychiatrist this time, and the doctor will say her life depends upon the murder of the baby. And you have a word, ‘mental hygiene’ – whatever you want you can subsume under mental hygiene…

“I don’t know the difference if you’re killing an infant one day old or at birth, or killing a fetus which is three months old…”

Avrohom Gordimer is chairman of the Rabbinic Circle at Coalition for Jewish Values, a public policy institute reflecting traditional Jewish thought. He serves on the editorial board of Jewish Action magazine, is a staff writer for the Cross-Currents website, and is a frequent contributor to Israel National News, Yated Ne’eman, and a host of other publications. He is a member of the Rabbinical Council of America and the New York Bar, and he works as an account executive at a large Jewish organization based in Manhattan. The views expressed in the above article are solely those of the writer. 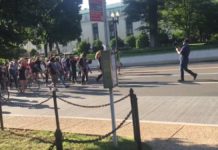 DC Protesters Trying to Link Black Lives Matter to Palestinians Chant, ‘Israel, We Know You, You Murder Children Too’ 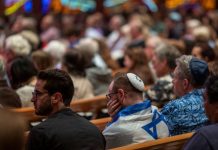