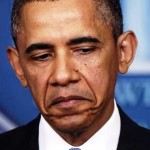 Lost in the brouhaha over an unnamed Obama official calling an allied country’s Prime Minister an expletive was a shocking admission by the Obama administration – that it is “too late” for Israel to do anything about Iranian nuclear capabilities.

In an article published in The Atlantic, an unnamed “senior Obama official” is quoted as saying the Obama administration thinks that Netanyahu will not launch a preemptive strike on Iran over its nuclear program. “It’s too late for him to do anything. Two, three years ago, this was a possibility. But ultimately he couldn’t bring himself to pull the trigger. It was a combination of our pressure and his own unwillingness to do anything dramatic. Now it’s too late.”

It remains unknown who this unnamed official was, and what their role is in the White House.

The quote “reflects the Obama administration’s policy, which has been engagement with Iran and not military preemption,” said Yoram Ettinger, retired Minister for Congressional Affairs in the Israeli Embassy in Washington, D.C. with rank of Ambassador. “ANY [diplomatic] deal with Iran, in Obama’s mind, is better than military preemption.”

Ettinger also believes that failing to remove the threat of a nuclear Iran is a domestic policy mistake for Obama, more so than a threat to Israel, as the United States is Iran’s chief target. “Israel is only a tertiary, or even 4th rate target for Iran. The United States is their number one target, followed by US-friendly oil producing Gulf states, and then perhaps NATO.”

However, Ettinger concludes, “Israel will err historically and dramatically” if it fails to remove the Iranian threat, should the United States fail to do so.