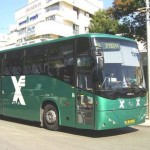 Riots broke out in eastern Yerushalayim after rumors spread that an Arab bus driver had been murdered by “Jewish extremists.” According to the Israel Police, however, the bus driver in question committed suicide.

The body of Yusuf Hassan Ramouni, a 32-year-old Arab resident of eastern Jerusalem who worked as a driver for the Egged bus company, was found hanging on a rope inside a bus. Paramedics arrived at the scene and tried to revive him, and he was later pronounced dead at Hadassah Mount Scopus Hospital.

Police investigators determined that Ramouni committed suicide. There were no signs of violence on his body. Yet rumors began swirling in Palestinian social networks and Palestinian media outlets, reporting that Ramouni’s family claimed he was lynched.

The Israel Police called on the Arab public in Jerusalem to demonstrate restraint and wait for official autopsy results.

“At this point, there is no suspicion of foul play,” the Israel Police said Monday. “In contrast to various foreign media reports, there were no signs of violence on the body.”

Arab riots raged in a number of eastern Jerusalem locations, including A-Tur, Issawiya, Abu Dis, and Ras al-Amud. On Monday, stones were thrown at Israeli vehicles in the Shimon Hatzadik neighborhood and just southeast of the Old City. One Israeli driver was lightly injured.