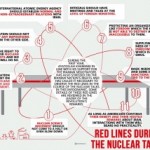 Some six weeks before the conclusion of crucial nuclear talks between P5+1 world powers and Iran, Ayatollah Ali Khamenei, in a Twitter feed he is believed to operate, posted a graphic laying out 11 non-negotiable “red lines,” beyond which his country’s negotiators would, presumably, not budge.

“During the past year, Ayatollah Khamenei, in line with his support for the Iranian negotiators, has also stressed on the Iranian nation’s rights and has called it necessary to observe the red lines in the course of the nuclear talks,” the infographic, which was posted on Sunday, said.

The talks with the P5+1 include the U.S., Britain, France, China and Russia – the five permanent members of the U.N. Security Council and Germany.

The list, essentially, rules out any agreement acceptable to the west, and particularly, Israel. The tweet comes days after a reports surfaced of a mysterious massive blast and fire which gutted parts of the Parchin nuclear facility, some 30 kilometers southeast of Tehran. Western analysts believe the site conducted high-explosives tests, connected with developing triggers for nuclear weapons.

Following are the 11 points:

On October 1, at a meeting with U.S. President Barack Obama, Israeli Prime Minister Benjamin Netanyahu warned of the danger of leaving Iran with nuclear capabilities.

“Iran seeks a deal that would lift the tough sanctions that you worked so hard to put in place and leave it as a threshold nuclear power,” Netanyahu told Obama during a press conference before their private meeting in the Oval Office. “And I firmly hope under your leadership that would not happen.”

Dissidents have said in recent days, that some of the weapons research work that was carried out at Parchin, has been transferred elsewhere. 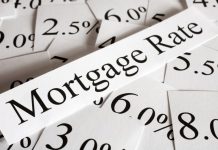 Should I Refinance Amidst Coronavirus Fallout? 13 Million Homeowners Are Trying To Decide

Listen: The Daily “Bitachon 4 Life” Burst of Inspiration on Matzav.com: How Important Is Bitachon?