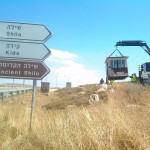 One day after a shooting attack that left one civilian dead and three others injured, the Binyamin Regional Council erected a waiting station and guard post yesterday at the Gideon junction, the site of Monday’s attack.

The Council is determined to act to protect the area’s residents after its numerous requests for increased security at the junction – a popular hitchhiking spot – have gone unanswered by the government.

“The terrorists’ aim is to harm the routine of our lives and our existence as a nation in our homeland. They will not succeed,” the Binyamin Regional Council said in a statement to Tazpit News Agency. The council also added that they intend to “strengthen and settle throughout the entire land [of Israel].”

“We call on the government of Israel and Defense Minister [Moshe Yaalon] to act firmly to ensure the security of the people, and to stop their feeble attitude toward these threats, exemplified by the loosening of restrictions [on Palestinians], with bitter and clear results.”

The statement referred to a recent government decision to loosen restrictions on Palestinian movement in Israel, including the granting of entry permits for Palestinian vehicles and allowing Palestinians to travel directly from their homes in Israeli-controlled territory to Jerusalem, in order to participate in the Ramadan festivities.

Defense Minister Moshe Yaalon announced on Tuesday that the government is already taking steps to bolster security in the area.

“Following the attacks, troop presence has been increased in Judea and Samaria to inhibit the movements of the perpetrators,” Yaalon said in a statement to the press. “We have also been forced to cancel the loosening of certain restrictions and to take cautionary measures,” he said.

A crowd of approximately 400 local residents demonstrated on Tuesday evening at the site of the shooting attack, demanding that the government step up its efforts to establish security. Another demonstration is planned for Wednesday evening.