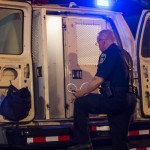 Baltimore Mayor Stephanie Rawlings-Blake announced on Wednesday that the police vans will soon be outfitted with cameras, in an effort to prevent fatal injuries like that one in which Freddie Gray suffered.

Gray was transported in a van with an on-recording camera that the driver could use to check on the passenger, but it was not working at the time.

The mayor also said the city would review riot gear used by police during the riots following Gray’s death, after complaints from some officers that they were not equipped for the unrest. Read more.