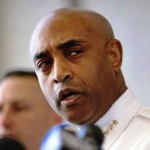 Baltimore’s mayor said she fired the city’s police commissioner on Wednesday, hours after the city logged its 155th murder for the year.

Commissioner Anthony Batts faced harsh criticism for presiding over a massive spike in robberies, shootings, and homicides since the riots over Freddie Gray’s death.

Arrests plummeted across the city while crime exploded, despite the commissioner’s insistence that this was not the result of a work slowdown. Read more at the Baltimore Sun.