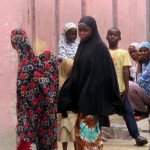 Aid officials said Tuesday an estimated 80 children who were held captive at a Boko Haram camp in Cameroon were unable to remember their names or recall their hometowns after they were rescued by security forces.

The children ranged from ages 5 to 18 and did not speak English, French, or any local language, said Christopher Fomunyoh, a director for the U.S.-based National Democratic Institute.

The children were rescued from a camp in northern Cameroon in November after security forces raided what they though was a Koranic school. Fomunyoh said he had visited an orphanage where the children are being rehabilitated, but that many of them had lost track of who they were. Read more at Time.