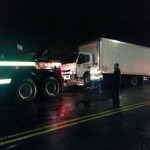 Brooklyn, NY – Assemblyman Dov Hikind (D-Brooklyn) announced that consequences are escalating for those who park commercial vehicles illegally along 21st Ave. in Boro Park. Last night, the NYPD’s 66th Precinct begins both towing and booting the tires of illegally parked commercial vehicles, including the many tractor trailers that community members have complained of.

“We’ve been monitoring this situation and meeting with residents and the police for months,” said Hikind. “There’s been an ongoing effort to protect the community by ticketing these illegally parked vehicles on a regular basis, and now the police are getting even tougher.

“I want to thank Captain Kenneth Quick of the 66th Precinct as well as his many officers who have taken this situation very seriously and provided additional patrols of the area at night. Our community is very appreciative.”

Just last week, Assemblyman Hikind met with Captain Quick along with Community Board 12 Chairman Yidel Perlstein, District Manager Barry Spitzer, and community members Moshe Weber and Shloimy Gombo, who live in the vicinity. “Captain Quick assured us last week that this matter was being escalated and we’re already seeing the results tonight,” said Hikind. “I will remain in contact with the residents and the police to make certain that this matter is fully resolved.”