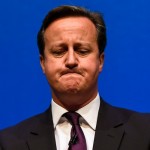 Speaking at a party at Downing Street, British Prime Minister David Cameron reportedly said he’s had enough. “I have to say that after the events I’ve been facing over the past few days, assassination would be a welcome release.”

Cameron also dished on his newly forged friendship with former Labour Prime Minister Gordon Brown, who has become an ally in the political battle to keep Scotland from seceding.

“We’re actually good friends,” Cameron said, of his former rival. Brown gave the speech of his life Wednesday morning in a last-ditch bid to save the union. Read more at Business Insider.