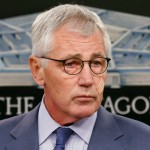 President Obama formally announced Chuck Hagel’s resignation from his post as Secretary of Defense today, less than two years after a long and painful confirmation process to install him in the job. Obama said that Hagel concluded it was an “appropriate time for him to complete his service.” He praised Hagel as “no ordinary Secretary of Defense,” citing how his military service during the Vietnam War helped him establish a “special bond” with troops.

Obama also said Hagel will stay on as Secretary of Defense until a replacement is selected and sworn into office. In the summer, Hagel, a Republican, appeared to contradict Obama’s assessment that ISIS was a “JV team.”