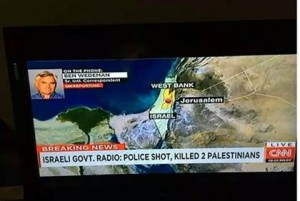 Yossi Dagan, the head of media relations for the Samaria Regional Council, filed a formal complaint Tuesday with the Government Press Office (GPO) against a CNN reporter for equating the terrorists involved in the Har Nof massacre with the victims.

According to Dagan, American CNN reporter Ben Wedeman was responsible for the headline describing the massacre under the headline, “Israeli police shot dead two Palestinian civilians” – when, in fact, the shooters were Palestinian terrorists who killed four Jews and wounded eight others as they prayed the morning service before being killed in a gun battle with police.

Dagan charged that the headline was a serious violation of international journalism ethics, and called to revoke Wedeman’s press license and, generally, bring anti-Semitic coverage of terror attacks by foreign journalists to an end – permanently.

“There is no reality elsewhere in the world where journalists can report a terror attack in this style,” he stated. “This rule should also apply to foreign reporters in Israel. There is good and there is bad, there are killers and there are victims.”

“The media arena in recent years has become an equally important battlefield for Israel, and it must use all the tools at its disposal to demand certain baselines in its media coverage,” he continued. “Coverage like this legitimizes the next murder; whoever loses in this loses the next war as well.” Read more at Arutz Sheva.