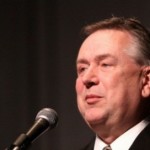 Under the “Right of Return Act,” the U.S. would cease funding the Palestinian National Authority, as well as the United Nations Relief and Words Agency for Palestinian Refugees in the Near East (UNRWA), whose facilities have been used to launch rocket attacks on Israel.

The State Department would also call for Israel to be allowed to extend its sovereignty over Judea, Samaria, and Gaza, and for the Arab residents currently residing in those areas to be granted citizenship in Jordan and are thus repatriated.

The bill is numbered H.R.5734 and has been referred to the House Foreign Affairs Committee.