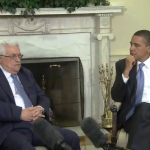 Earlier this year, a New York court ordered the Palestinian Authority to pay $218.5 million to victims of terrorist attacks that were carried out by PA employees, acting with the knowledge and assistance of their PA superiors. The PA is claiming it doesn’t have enough money to post a court-ordered bond while it appeals the ruling.

This week, the Obama administration rushed to rescue the PA. The same administration that never intervenes in court to help Israeli victims of Palestinian terrorism, intervened to help the perpetrators of terrorism. It claimed that the PA is essentially penniless, and warned the judge that if the PA was required to post the bond, it could lead to the “collapse” of the PA. Such a collapse could “fuel anger and frustration” among Palestinians, the administration warned–it a thinly-disguised threat that there would be Palestinian violence if the judge did not comply.

Is the Palestinian Authority really broke, as the Obama administration claims?

Newly-leaked document say otherwise. The Associated Press reported August 11 that the documents reveal “attempts by Palestinian officials to misuse public funds,” attempts which “highlight the corruption and mismanagement” that is “rampant in the Palestinian Authority government.”

One document is signed by Majdi al-Khaldi, a senior adviser to PA chairman Mahmoud Abbas who accompanies him on his trips around the world. In the document Khaldi asks the foreign minister of the oil-rich gulf state of Bahrain to contribute $4-million “to fund a private neighborhood complex for Palestinian officials in an upscale area of Ramallah,” the AP reported. It added: “He insisted the complex was “meant to resist the Israeli settlements,” even though there are no settlements where the complex was built.”

The second document is a letter from Nazmi Muhanna, general director of the PA’s Palestinian Crossing and Borders Authority. It asks the PA to pay for his daughter’s private schooling in Jordan, and other favors.

AP quoted Azmi Shoabi, a leader of the corruption watchdog group Transparency International, as acknowledging that “there are big black holes” in the PA’s financial and administrative system that “need to be addressed and reformed.” These flaws include “failing to publish financial reports properly and on time while not overseeing some 20 government-run funds headed by executives with excessive salaries.” Some PA departments have become “private kingdoms” for some officials, Shoabi said.

A remarkable article in The Tower last year shed additional light on this subject. It was written by Aaron Menenberg, who in 2010-2011 was an official of the Israeli Defense Ministry’s Civil Administration, which deals with non-security matters in the portion of Judea-Samaria that Israel administers (not the areas where 98% of the Palestinians reside, which the PA governs).

Menenberg frequently interacted with Palestinian businessmen. His report described how one day he received a phone call from a farmer named Sammy Khalidi. With the assistance of the U.S. Agency for International Development, he was helping Palestinians export produce to other countries. Khalidi reported that he had received a disturbing call from the staff of then-PA Prime Minister Salam Fayyad, the “technocrat” and “moderate” whom the West bear-hugged.

Fayyad’s office was demanding that Khalidi switch packing houses; they wanted him to start sending his produce to one owned by the Sinokrot Global Group. Sinokrot’s facilities, however, were south of where Khalidi was situated, and he need to send his produce north in order to reach foreign markets in time. “My product will go bad before it gets to market,” Khalidi protested. “And they are more expensive.” But Fayyad’s people had no interest in what was cost-effective. And the reason was obvious to Khalidi: Sinokrot was headed by Mazen Sinokrot, who until recently was the PA’s Minister of Economy. Connections led to corruption, inefficiency, and the waste of millions of dollars.

It was one incident, but it is undoubtedly duplicated every day throughout the PA.