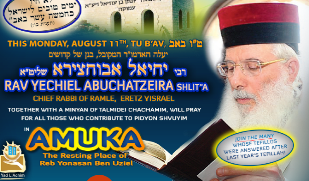 [LINK HERE AND BELOW.] For those who haven’t yet merited to find their zivug (match), Amuka isn’t just a place, it’s an extraordinary opportunity to have their prayers answered, ESPECIALLY ON THE AUSPICIOUS DAY OF TU B’AV.

“There were no better days for the Jewish people than the 15th of Av…,” says the Talmud. On this day, the young women of Jerusalem would go out dressed in their white finery and dance in vineyards, in a courtship ritual that led to marriage.

This year, Harav Yechiel Abuchatzeira, scion to a family of renowned kabbalists, will once again be going to Amuka on the 15th of Av – which this year falls out on Monday, August 11- on behalf of Yad L’Achim to lead a tefillah of the masses. The Rav, who is also the chief rabbi of Ramle, will read from a list of names phoned into Yad L’Achim’s hotline, and utter a prayer for each individual by name.

Many of those who participated in last year’s event have reported seeing positive results.

The event, which is shrouded in an aura of holiness and reverence, begins with mincha, as it says, “Eliyahu was answered only at mincha.” Afterwards, Rav Abuchatzeira will lead the crowd in the recitation of seder hatikkun. 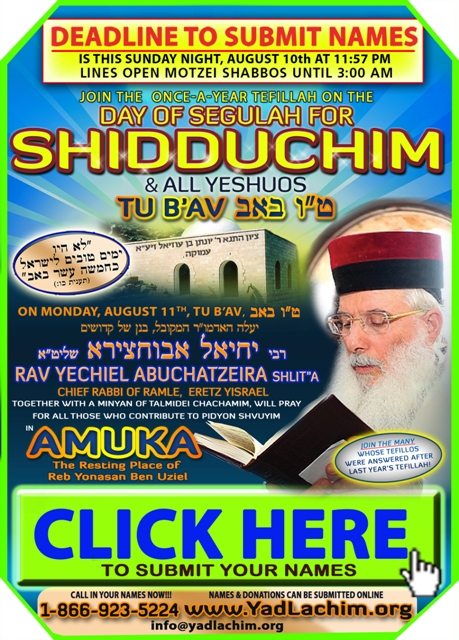 The Rav will then take out a shofar that is 150 years old, an inheritance from his grandfather, the admor Rabi Massoud Abuchatzeira, who received it from his father, the Abir Yaakov. Rabi Massoud is the father of the Baba Sali and of the Rav’s father, the Baba Chaki. Before blowing it, the Rav will ask those assembled to havekavana that the prayers they offer on behalf of men and women in need of a shidduch will be answered quickly. [Baba Sali and Baba Chaki both had a lifelong relationship with Yad L’Achim and would constantly offer words of chizuk to Yad L’Achim to continue in their Avodas Hakodesh.]

The admor will ascend the roof of the holy tziyun and circle it seven times, holding lists of those who have donated to the mitzvah of Pidyon Shvuyim. He will recite relevant chapters of Tehilim and again blow the shofar, followed by the recitation of the moving Ana BeKo’achprayer.

Rav Abuchatzeira will then enter the tziyun, and after spending long minutes lighting candles, will begin reading the names of those in need of shidduchim, carefully enunciating each one in a heartfelt plea.

At the conclusion of the tefillah, Rav Abuchatzeira davens: “Let it be His Will that our tefillot are accepted by the Holy Throne, and the donors whose names we read now will merit mercy and salvation and to quickly establish a bayit ne’eman beYisrael, among all of Klal Yisrael in need of a yeshuah.”

A donation to this unique project does more than give the child, or sibling or friend in need of a shidduch an opportunity to benefit from a noted segulah. It is the fulfillment of the mitzvah of Pidyon Shvuyim, the rescue of Jewish women and children trapped in Arab Villages of which the Rambam states, “There is no greater mitzvah than Pidyon Shvuyim….”

JOIN THE MANY SINGLES (NOW MARRIED) WHOSE TEFILLOS WERE ANSWERED AFTER LAST YEAR’S TEFILLAH.

Day of Segulah of TU B’AV

& A Minyan Talmidei Chachamim of Yad L’Achim Will Pray For You & Your Loved ones
On Tu B’av, The Noted Day Of Segulah For Shidduchim, In Amuka

WHERE THOUSANDS HAVE ALREADY HAD THEIR TEFILLOS ANSWERED

NO MINIMUM DONATION REQUIRED TO JOIN THE TEFILLAH. 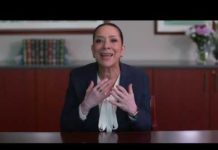