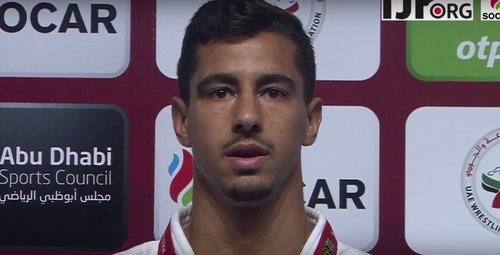 Israeli judoka Tal Flicker won a gold medal on Thursday at the Abu Dhabi Grand Slam judo tournament amid a ban by the tournament’s Arab organizers on Israeli national symbols, including the country’s flag and national anthem.

Video footage of the medal ceremony shows Flicker, who won the under-66 kilograms category, singing the “Hatikvah” anthem to himself as the International Judo Federation’s (IJF) flag and anthem played in the background.

“Israel is my country, and I’m proud to be Israeli. The anthem that they played of the world federation was just background noise. I was singing Hatikvah from my heart,” Flicker told reporters.

Israeli judoka Fili Cohen won bronze in the women’s under-52 kilograms category. She was also forced to take the podium with the IJF flag behind her.

“I’m glad we’re here, with or without the flag. As far as we’re concerned, what’s important is having [Israeli] athletes compete on such levels and proving to everyone that there’s no stopping Israel,” said the coach of Israel’s team, Oren Smadja.

Meanwhile, the discrimination against Israelis continued on Friday when the United Arab Emirates’s Rashad Almashjari refused to shake the hand of his Israeli opponent Tohar Butbul after losing to him in the men’s lightweight first round competition.

The incident resembled an event that occurred during the 2016 Summer Olympics, when an Egyptian judoka refused to shake the hands of his Israeli opponent after being defeated.