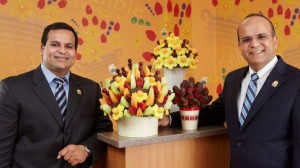 Over the past few weeks, a viral chain email has spread around the internet alleging that Edible Arrangements, the successful fresh fruit bouquet franchise, is giving “tens of thousands of dollars” to Islamic extremists, including Hamas. In a strange move for the organization, the Anti-Defamation League moved to vehemently defend Edible Arrangements and deny the allegations in their entirety.

“there is absolutely no truth to these unfounded assertions. While the Farid Foundation has provided funding to various organizations in the U.S. and abroad, there is no evidence to suggest that any of those funds have been used to support terrorism.”

While the statement failed to provide any specific evidence justifying such a forceful denial – the facts indeed do show that the company’s charitable foundation has donated to a group the government of Israel considers a financial front for Hamas.

Islamic Relief Worldwide is a founding member of the Union of Good (UOG), an umbrella of Hamas-funding charities. UOG is a designated by federal authorities as a terrorist entity, and is headed by Yusuf al Qaradawi, the spiritual head of the Muslim Brotherhood which gave birth to Hamas and Al Qaeda.

According to the Israeli Prime Minister’s Office, which banned the organization from operating in the West Bank this past June due to its ties to Hamas:

“The IRW’s activities in Judea, Samaria and the Gaza Strip are carried out by social welfare organizations controlled and staffed by Hamas operatives. The intensive activities of these associations are designed to further Hamas’s ideology among the Palestinian population.”

Despite ADL’s claim that “there is no evidence” funds donated to Islamic Relief “have been used to support terrorism,” the affiliation between Islamic Relief and Hamas is widely known. In fact, it made national news just two weeks ago when an internal strategy document from the campaign of Georgia Democrat US Senate candidate Michelle Nunn was leaked online. The document’s authors were worried that Nunn could be vulnerable to controversy during the campaign because a foundation she led, Points of Light, had made grants to “terrorists.” At issue was a $13,500 grant to Islamic Relief USA. The story was broken by Eliana Johnson of National Review, and the New York Times and MSNBC also reported the allegations as credible.

ADL’s current position dismissing as “a false rumor” the links between Islamic Relief and Hamas, acutely contradicts the past claims of at least one ADL official. In 2006, the current Chairman of ADL’s New England board, Jeff Robbins, wrote a memorandum to then Assistant US Attorney for the District of Massachusetts George Vien, asking him to investigate Islamic Relief USA because of: “a long series of direct associations by Islamic Relief Worldwide with Foreign Terrorist Organizations.”

Mr. Robbins’s allegations against Islamic Relief Worldwide and USA are in full below:

“Islamic Relief Worldwide’s Programs Manager in Gaza, Iyaz Ali, was arrested on May 10, 2006 and, according to the Office of israel’s Prime Minister, admitted to knowingly providing material support for Hamas, whereupon he was deported from Israel. The Prime Minster asserts that Islamic Relief Worldwide made extensive use of Hamas charities in the West Bank.

“The Government of Russia asserts that Islamic Relief Worldwide has actively supported terrorism in Chechnya.

“Provided thousands of dollars of funding to the al-Tawya Mosque in Brooklyn, which hosted speeches by the so-called Blind Sheikh, Omar Abdel-Rahman, serving a life sentence for conspiring to blow up New York City landmarks, and whose imam, Siraj Wahhaj, was named as an “unindicted person who may be alleged as a co-conspirator” in the 1993 World Trade Center bombing trial. Islamic Relief invited Siraj Wahhaj to speak at a fundraiser on April 2, 2006.

“Partnered with Kind Hearts, whose assets were frozen by the United States on February 19, 2006 for supporting Hamas, on fundraising projects; and

“Provided over $400,000 to the Muslim American Society, which has publicly acknowledged that it is based on the principles of the Muslim Brotherhood –identified by the bi-partisan 9/11 Commission as providing the foundation for al-Qaeda, Hamas and Islamic Jihad.”

“served as a forum for religious scholars and political activists to rail against Jews, call for the eradication of the state of Israel and accuse the United States government as waging a war against Muslims at home and abroad.”

ADL’s reputation as the most respected Jewish defense organization has recently taken a hit as the organization experiences what some observers are calling “mission creep” into leftist activism, which is often more sympathetic toward the causes of Islamic extremists – even when they conflict with Jewish interests.

As a result, the ADL has been accused of providing false cover to Islamic extremists across the United States. In 2012, the ADL supported a Detroit-area Islamic group’s plan to build a mosque in a heavily Jewish neighborhood, despite concerns about the mosque’s radical ties. In 2013 and 2014, the ADL appeared to have made false statements on behalf of the Newton Public School district, which was accused of using biased anti-Israel teaching materials. Last month, it emerged that the ADL had for years hired supporters of convicted Al Qaeda terrorist Tarek Mehanna to staff its interfaith summer camp program in New England.