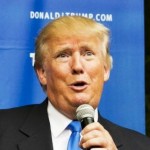 Republican presidential candidate Donald Trump Tuesday slammed the Iran nuclear deal, telling Newsmax that the accord was “very dangerous” and marks “a horrible and perhaps catastrophic event for Israel.

“The Obama administration’s agreement with Iran is very dangerous,” the billionaire developer said in a statement. “Iran developing a nuclear weapon, either through uranium or nuclear fuel, and defying the world is still a very real possibility.

“The inspections will not be followed, and Iran will no longer have any sanctions,” he added. “Iran gets everything and loses nothing.

“Every promise the Obama administration made in the beginning of negotiations, including the vow — made at the beginning of the negotiations — to get our great American prisoners returned to the U. S. has been broken,” Trump said. “This is a bad deal that sets a dangerous precedent.”

“This deal sets off a nuclear arms race in the Middle East, which is the most-unstable region in the world,” Trump told Newsmax. “It is a horrible and perhaps catastrophic event for Israel.

“Furthermore, we should have kept the billions of dollars we have agreed to pay them,” he added, citing the deal as an example of “tapping along.”

And since Tehran has been “unchecked for so long throughout this extremely lengthy process,” Trump said, “I guarantee that they are much closer to producing a nuclear weapon than they were at the start of negotiations.”

Trump continued his attack on those leading the talks with Iran, including Secretary of State John Kerry. Negotiations officially began in 2013 after the election of Iranian President Hassan Rouhani.

“The fact is, the U.S. has incompetent leaders and even more incompetent negotiators,” he told Newsmax. “We must do better for America and the world.”

He further slammed the deal to the Fox Business Network.

“I think the deal is absolutely horrible for us, but it’s really, really bad for Israel.”