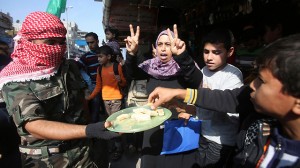 The families of the two terrorists who killed four people in the brutal attack in Yerushalayim this morning have hailed the two as heroes, as candies to celebrate the attack were handed out in the West Bank and Gaza.

Alaa Abu Jamal, a cousin of the terrorists, said that Israeli policies were to blame for the attack at the shul, when the two entered the compound during morning prayers, armed with meat cleavers and a gun.

“This occurred because of the pressures of the occupying Israeli government on the Palestinian people and in Jerusalem generally, and the ongoing harm to the al-Aqsa mosque; this act is something normal for any person who is connected to his people, to courage and to Islam.”

“We got the usual death notification and we shouted with joy, people here also handed out candies to guests who came to visit and were happy for the martyrs.”

He said that the family had been surprised by the attack, and that the two terrorists had not had any political affiliation. “We had not expected it to happen,” he said. “One of them is married with three children; I do not know what will happen.”

He added: “Praise God. For a person to die as a martyr is a great thing.”
Palestinian President Mahmoud Abbas on Tuesday condemned the deadly attack, and called for an end to what he said was Israeli provocation over the Temple Mount.

“The presidency condemns the attack on Jewish worshippers in their place of prayer, and condemned the killing of civilians no matter who is responsible,” said a statement from Abbas’ office.

“We condemn all acts of violence from all sources, and demand an end to the invasions of Al-Aqsa Mosque, the provocations of settlers and the incitement by some ministers in the Israeli government.”

The statement said that, “It’s time to end the occupation and to put an end to everything that makes violence and tension.”

Residents of Gaza Strip praised the brutal attack Tuesday. Fireworks were set off in celebration and from the mosques were heard chants of “Allahu Akbar” (God is most great) in honor of the attack. Islamic Jihad also issued a statement, calling the attack “a natural response to the crimes of the occupier.”

Hamas also praised the attack and called for further “acts of revenge”. An official Hamas statement said that the attack was a response to the death of bus driver Yusuf Hassan al-Ramouni, who was found hanged at a Jerusalem bus terminal Sunday night. While al-Ramouni’s family claimed foul play, autopsy results confirmed police’s suspicion of suicide on Monday afternoon.