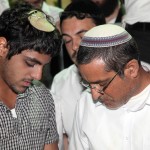 The American Friends of Sderot announced today that Uri Yifrach, the father of slain Israeli teen Eyal Yifrach, will be the featured guest speaker at its upcoming dinner. 19-year-old Eyal Yifrach, 16-year-old Gilad Shaar, and 16-year-old Naftali Fraenkel were abducted and subsequently murdered by Palestinian Arab terrorists this past summer.

Mr. Yifrach will appear at “The Front Line Israel Solidarity Celebration,” a gala event being run by the American Friends of Sderot. This special event will take place on Wednesday evening, November 19, 2014, at the Meadowlands Hilton, which is located at 2 Meadowlands Plaza in East Rutherford, New Jersey. The reception will begin at 6:00 PM.

Sderot, a city located in Southern Israel, has borne the brunt of the barrage of rockets fired from Gaza over the years. During Operation Protective Edge this past summer, the residents of Sderot often had only 15 seconds to run to safety when the alarm sounded, thereby signaling an incoming rocket attack.

The Max & Ruth Schwartz Sderot Hesder Institutions played a pivotal role throughout the duration of this summer’s military conflict and assisted the soldiers of the Israel Defense Forces and the residents of Sderot in a variety of ways. The yeshiva in Sderot hosted a Special Forces Battalion whose 600 soldiers lodged and ate together with the students, and served as a central depot for receiving and distributing toiletries, snacks and supplies to soldiers throughout the area. In addition, they hosted weddings, day camps and senior citizen programs on their armored campus, served in the first response teams and participated in running the volunteer control center, and helped the elderly and infirm with a variety of daily tasks.

“We are very much looking forward to the inspiring words that we will hear from Uri Yifrach at our upcoming dinner,” said Rabbi Dovid Fendel, Rosh Yeshiva at The Max & Ruth Schwartz Sderot Hesder Institutions. “The resilience and resolve that he and his family displayed in the wake of such a horrific tragedy that took the life of his dear son Eyal is something that provided tremendous inner strength to a nation that was absolutely stunned by the loss of those three young boys.”

“Our upcoming dinner presents us with a very unique opportunity to replicate the incredible sense of unity that we witnessed this summer as Sderot was under attack by terrorists intent on wreaking havoc in the Jewish State,” said Yossi Baumol, Executive Director of the American Friends of Sderot. “Uri Yifrach’s presence at the dinner will further enhance what is certain to be a wonderful and meaningful event in support of the people and city of Sderot.”

In addition to the address by Uri Yifrach, the November 19 Sderot dinner will also feature Givati Commander Colonel Ofer Winter of the IDF, who will speak about “Making the Ultimate Sacrifice,” and renowned Jewish radio personality Nachum Segal, who will serve as the Master of Ceremonies.

The event will also pay tribute to a number of outstanding individuals who have demonstrated true leadership and unity with Sderot and the State of Israel. The “Kosher Troops” Mission Awardees are Rivka Senter, Tamara Gluck, and Sara and Shlomo Fuerst; the Rabbinic Leadership Awardees are Rabbi Steven and Karen Pruzansky; the Friends of Sderot Awardees are Simcha and Margarita Babaev; and the Gevurat HaTorah Awardees are Simon and Barrie Jacob and Joe and Lori Rozehzadeh.