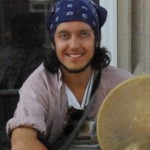 Alexander Ciccolo was arrested in Adams, Massachusetts, on July 4 for planning a terrorist attack in support of ISIS. He is being charged with unlawful gun possession.

The arrest was apparently part of a dragnet of ISIS supporters.

A federal criminal complaint against Ciccolo alleges that he bought pressure cookers, two pistols, and two rifles that he said he was going to use to attack an unnamed university.

Ciccolo allegedly told a confidential witness that he would live-stream the attack on the Web, and that Muslim students would be spared and offered the option to participate. Ciccolo, a.k.a. Ali al-Amriki, had a history of mental health issues and had been under FBI surveillance since 2014. The criminal complaint alleges that Ciccolo was inspired the 2013 Boston Marathon bombing. “Allahu Akbar!!! I got the pressure cooker today,” he allegedly told an undercover FBI informant.

His father, Robert, a Boston police captain, had been one of the first responders to the bombing. The two were reportedly estranged. Read more at ABC News.