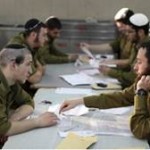 While the first chareidi mechina, or pre-army preparatory academy, began operating last August, the Hesder program includes actual military service and lasts four years, as opposed to the year or two of pre-army training and Torah study in the mechina schools.

The new Hesder track received final approval from the Defense Ministry last week, and has already started with its first batch of inductees. The 16 students will take part in a 48-month-long track of combined army service and religious studies.

Yeshiva Derech Chaim, based at the Yerushalayim College of Technology (Machon Lev) campus, will run the program. The new program for chareidi students will include 24 months of IDF service, as opposed to 17 months in other programs. Read more here.