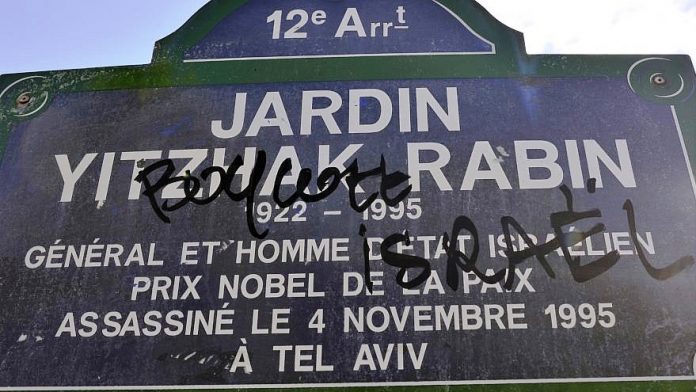 Less than a day after they were installed, the Parisian suburb of Bezons has removed signs renaming a central street “Nakba Lane,” following an outcry from Israel and local Jewish groups.

According to media reports, Bezons Mayor Dominique Lesparre unveiled the plaques renaming the street after the nakba (Arabic for “catastrophe,” referring to the displacement of Palestinian refugees during Israel’s 1948 War of Independence) in a ceremony attended by city council members, members of the community and the local press.

A sign marking the road, located near city hall, read: “In memory of the expulsion of 800,000 Palestinians and the destruction of 532 villages by the war criminal [Israel’s first prime minister] David Ben-Gurion for the establishment of the State of Israel.”

“These provocations are unacceptable given that Israel and France share a strong and sincere friendship, cemented by shared democratic values,” the embassy said in a statement.

Francis Kalifat, the president of the Representative Council of French Jewish Institutions, called the street’s renaming “false declarations, shockingly irresponsible and dangerous.” He said the move encouraged “anti-Semitic violence, which is now given false historical justification.”

Prior to the removal of the plaques, one council member said “we decided to do this to mark 70 years to the ‘Nakba.’ The silence on the subject is intolerable.”

This is not the first time that the Bezons local council has sparked controversy with its anti-Israel stance.

In 2013, the local council named Popular Front for the Liberation of Palestine member Majdi Rahima Rimawi an “honorary resident.” Rimawi was sentenced to life in prison for his involvement in the 2001 murder of government minister Rehavam Ze’evi.

Bezons has a sister-city agreement with the town of Bani Zeid near Ramallah, where Rimawi’s family lives. JNS.ORG