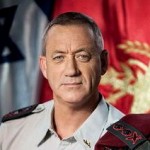 Former IDF chief of staff Benny Gantz said Friday he was not more concerned about Israel’s security following the signing of the nuclear accord between Tehran and world powers, adding that he saw the benefits of the deal which he said had prevented war. The deal, he said, was a case of the “cup half-full.”

“I refuse to get hysterical” about the nuclear deal, he told a gathering of policymakers and analysts in Washington DC Friday morning, in likely reference to official Israel’s excoriation of the agreement.

Read more at The Times of Israel.