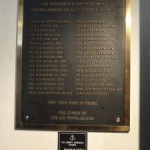 With U.S.-Israeli bilateral relations hitting a new low this past week, the Qatari-financed news broadcaster Al Jazeera America on Friday broadcasted a special report on the USS Liberty, the American naval vessel that came under deadly fire from Israeli forces on June 8, 1967 – the fourth day of the Six Day War which pitted the Jewish state against a coalition of Arab armies.

Thirty-four Americans died and 171 were injured in the attack. Israel said it mistook the Liberty for an enemy vessel, the Egyptian ship El Quseir. Subsequently, Israel issued a full apology for the attack, and has to date paid out more than $12 million in compensation to the survivors and their families, as well as the U.S. government.

In an interview with The Algemeiner, former Israeli Ambassador to the U.S. Michael Oren, an expert on the Liberty affair who now serves as Ambassador-in-Residence at The Atlantic Council, asserted that “thousands of pages of formerly classified documents on the Liberty have been declassified, both Israeli and American. None of those documents – I stress none – indicate that the Liberty was anything other than a tragic friendly fire episode.”

Among the declassified documents, Oren said, “are the tapes made by Israeli pilots and the tapes intercepted by American intelligence. All of them indicate that the Liberty attack was an accident. Every once in a while, someone comes up with ‘new evidence,’ but it always falls short.”

The USS Liberty affair has long been a favored topic of Israel’s harshest critics in America, as well as more extreme antisemitic conspiracy theorists, who insist the attack was deliberate. These detractors charge that Israel attacked the Liberty because the ship was eavesdropping on Israeli plans to attack the Syrian-controlled Golan Heights. Oren, who authored an extensive report on the matter, is adamant that “Israel made no attempt to hide its preparations for an offensive against Syria, and that the United States government, relying on regular diplomatic channels, remained fully apprised of them.” According to Oren, the attack was a tragic example of friendly fire, with severe operational errors made by both American and Israeli military planners.

Another theory advanced by the American investigative journalist James Bamford – described by Oren as “a well-known conspiracy theorist, who keeps coming up with different stories” – holds that “Israel mounted the attack because it worried that the Liberty would learn of the nearby killing of hundreds of Egyptian POWs by the Israeli army.” As an Anti- Defamation League report on the Liberty incident pointed out, “no evidence has been found to corroborate a war crime charge.”

Al Jazeera’s report is produced by Richard Belfield, a British journalist. In an article for the broadcaster’s website, Belfield left little doubt as to which side of the dispute he falls on. “First, the crew had been attacked in broad daylight by a close ally, then they were betrayed by their government and now they were being humiliated by the same agency many had worked for back in 1967,” Belfield wrote. His article made no mention of the compensation paid by Israel, and nor did he say whether he had spoken to any Israeli sources.

Belfield has somewhat of a penchant for conspiracy theories. His 2005 book “The Assassination Business” claimed the official versions of the death of Britain’s Princess Diana and the murder of Israeli Prime Minister Yitzhak Rabin were false, and that British and Israeli intelligence services were likely involved in both deaths. Belfield’s book was described by the respected book reviewer Kirkus Reviews as an “oddly entertaining exposé,” with readers advised to “keep a tumbler full of salt grains close at hand” when reading it.

In his account of Rabin’s assassination, Belfield declared, “the history of modern Israel is one of conspiracy interrupted by assassination, a volatile and feverish democracy underpinned by the world’s most ruthless intelligence services, for whom there is no moral debate about ends and means.” Even more outlandishly, he wrote of “the long tradition of Jews assassinating other Jews” – without providing examples – and argued, again with no citation, that “ancient Talmudic law” portrays as a “sacred duty” the imperative for a Jew to kill another Jew who “imperils” Jewish lives or properties.

While no evidence has emerged to suggest that Al Jazeera has deliberately timed the broadcast of Belfield’s film to coincide with the current crisis between Washington and Jerusalem, interest in the report is likely to be heightened because of the diplomatic clash. Al Jazeera promises that the report will reveal “the shocking truth behind a deadly Israeli attack on a US naval vessel.”

The ailing Al Jazeera America is certainly chasing ratings, given its poor performance in the 14 months since its American version went on the air. According to media and entertainment website The Wrap, Al Jazeera America “is down 44 percent compared to [predecessor] Current TV,” averaging just 14,000 viewers in a “total day.”