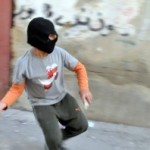 Several Israeli sixth-graders and instructors on a school field trip in the Galilee were injured when they came under a hail of stones hurled by Arab teenagers, Israel’s NRG News reported Wednesday.

During a nature hike to the Arbel Cliffs overlooking the Sea of Galilee, the 16 to 17-year-olds, from Kfar Manda in the western Galilee, pelted the group of 10 and 11-year-olds from Kibbutz Sde Eliyahu, injuring several pupils and teachers, and hitting one of the kids in the head.

“The students were crying on the bus; there is no doubt that they are traumatized,” school officials said, and noted that at least one member of the group required hospitalization for their injuries.

“During the descent [from the cliff], the group of female students sat down for a break. Suddenly stones started flying,” in the words of one teacher.

“The students panicked and the educational staff scrambled to try to find shelter. One of the students got hit in the head and a teacher who tried to protect the students was injured,” officials said.

The staff alerted the school, which summoned police and an ambulance.

Throughout the frightening event, the staff and security guard tried to keep the girls calm until help arrived. They, eventually, were evacuated to a hospital in nearby Afula, where a teacher was hospitalized for her injuries.
“They were frightened and some even cried when the event was over. We are making every effort to help them,” the official said, noting, however, that the Arab students’ instructors “tried to calm them down, and spoke with us – but their teachers really did not respond and did not intervene.””The students had a very difficult experience,” an official said.
The school principal sent a letter to all the parents saying that “tomorrow we will talk with the class in order to process the experience and identify if there are children who need additional assistance. If your child reacts abnormally or in a worrisome manner, please let us know.”

Tiberias Police detained the Arab students’ guide for questioning, after which he was released, and launched an investigation into the circumstances of the case.