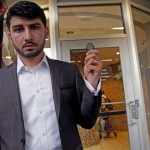 The key fobs send an electronic signal to a sensor on the doorframe, automatically opening the lock on the building’s entrance door.
A Brooklyn federal court lawsuit argues that Jews who create, trigger or even ask someone to make an electronic circuit for them on Shabbos “will be “denied a place in Heaven.”

Sinners who are mechalel Shabbos are to be “shunned from the Jewish community…treated differently under Jewish law in a variety of ways, and otherwise caused emotional pain and suffering,” claims a lawsuit against the 20-building complex in Corona, Queens.

The key fobs aren’t the only problem zapping observant Jews in Lefrak City. The extensive renovations at the complex included motion detectors in the stairwells to electronically turn on the lights, which for years were simply left on 24 hours a day.

“Hundreds of Jewish families and potentially thousands of Jewish individuals have been forced to either break Jewish law, remain holed up in their apartments or stand outside waiting in the snow, rain and dark of night, in order to observe their Sabbath due to The Lefrak Organization’s failure to accommodate the concerns of their Jewish tenants,” according to residents and plaintiffs Sulaymon Ibragimov and Murod Takhalov.

The renovations at the 4,605-apartment complex are “discriminatory,” the men charge.

They say they’ve often been stranded outside on the holy day of rest, when they’re not allowed to wave the key fob by the sensor on the entrance door to get inside.

“I stand around and I hope for a miracle every single time,” Ibragimov, 26, told The Post. “I hope somebody will walk ahead of me and pop [the door] open, and then I stand by the elevator and wait.”

Ibragimov is often forced to wait in the hallway near the elevator on his floor, hoping someone comes by and calls for the lift because he can’t push the button himself, and is barred, because of the motion detector lights, from using the stairs.

“That waiting can be hectic. It’s muggy, humid, there’s no air conditioning in the hallways. I’ve waited as long as an hour sometimes,” the married father of two said.

“Lots of times I would just get disappointed and turn back around. Basically I end up missing temple because I don’t find any way to get down” to the lobby.

The problem would be easily solved if Lefrak gave them keys, or left the stairwell lights on during Shabbos, but the complex refused, the men say.

“Now observant Jews have to stand around outside “including in the rain, cold, snow, and the dark of night in a neighborhood that has seen murders and other crimes occur regularly,” according to the lawsuit.