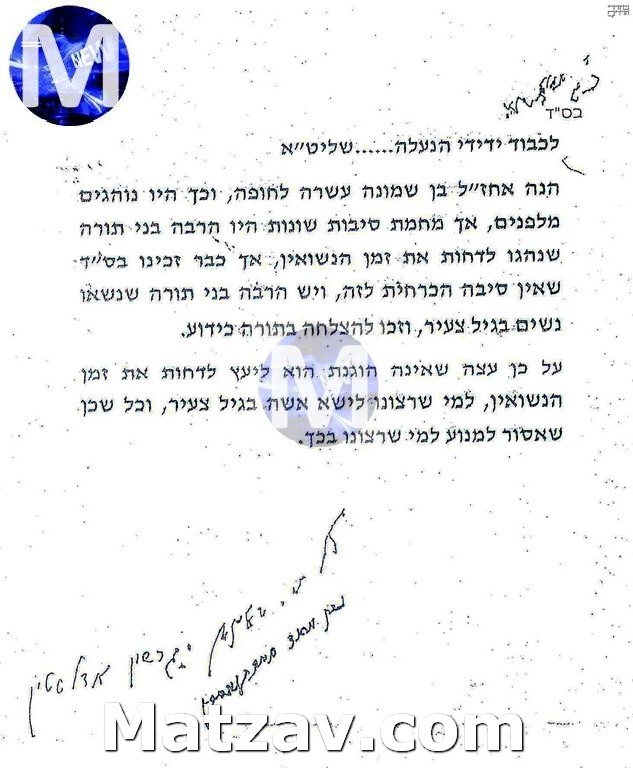 Gedolei Eretz Yisroel, Rav Aharon Leib Shteinman, Rav Chaim Kanievsky and Rav Gershon Edelstein, have signed a letter stating that those boys who wish to marry at a younger age should not be discouraged from doing so.

Until now, bochurim in the Yeshiva Torah world have generally entered shidduchim at age 22-23. [Rav Chaim Kanievsky, though, has long encouraged his grandchildren to marry at 18.]

In the past, Maran Rav Elazar Shach zt”l was strongly opposed to boys marrying at a young age. In fact, certain yeshivos asked bochurim who got engaged at a young age to find a different yeshiva to learn in.

Now, however, the gedolim have issued a letter supporting those who wish to marry younger. However, the letter is very carefully worded. It states as follows: “Chazal say Shemoneh Esrei l’chupah, and thus did we conduct ourselves in earlier times. However, due to various reasons, many bnei Torah postponed the time of marriage. Now, though, we have merited that these reasons are no longer prevalent, and there are many bnei Torah who have married at a young age, and they have seen success in Torah [learning]… Therefore, it is not correct to advise [bochurim] to postpone the time of marriage for those who wish to marry at a younger age, and surely it is assur to prevent those who wish to do so.”

Matzav.com Israel learned that Rav Gershon Edelstein closely scrutinized the language of the letter before approving it. After he signed it, it was signed by Rav Shteinman and Rav Kanievsky.

The letter does not outrightly say that bochurim should enter shidduchim earlier than they have been, but, rather, that those who wish to enter shidduchim younger should not be stopped from doing so.