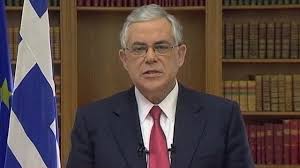 A bomb exploded inside a car with former Greek Prime Minister Lucas Papademos in central Athens on Thursday.

Papademos and two bank of Greece employees were wounded when the bomb exploded inside the car they were in, police said.

Papademos was taken to the hospital with non-life threatening injuries. His driver also was wounded, a police official told The Telegraph.

Greek government spokesman Dimitris Tzanakopoulos described the incident as an “attack.” He said the former prime minister and the two people injured were in stable condition and are conscious. Doctors “are undergoing all the necessary medical tests,” Tzanakopoulos added.