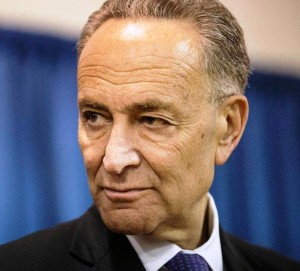 Chuck Schumer is getting an earful from opponents of the Iran nuclear deal.
More than 10,000 phone calls have flooded his office line the past two weeks, organized by a group looking to kill the deal. Another group has dropped seven figures on TV in New York City to pressure Schumer and other lawmakers to vote against the plan. The powerful American Israel Public Affairs Committee has put its muscle behind an effort to lobby the New Yorker against it.

And Dov Hikind, a state assemblyman from Brooklyn, was arrested for disorderly conduct while protesting the deal outside Schumer’s office.

People who have spoken with the senior New York senator believe the pressure campaign is having an effect: They say there is a growing sense inside and outside the Capitol that Schumer will vote against the deal when the Senate considers it in September. The bigger question many have now is this: How hard will he push against it?

Schumer is one of about 15 Democratic senators who will decide the fate of President Barack Obama’s Iran nuclear deal in Congress. The president can afford to lose no more than a dozen Democrats on the Senate floor, and as the next Democratic leader, Schumer may be the most critical of them all.

In an interview with POLITICO, Schumer insisted he’s still weighing his vote. He said he would decide based on the merits of the deal, not lobbying from either side.

“I haven’t made up my mind,” said Schumer, who is in line to be the first Jewish Senate leader next Congress. “There are expectations all over the lot. I’m doing what I’m always doing when I have a very difficult decision: Learning it carefully and giving it my best shot, doing what I think is right. I’m not going to let pressure or politics or party get in the way of that.”

He wouldn’t say if he would forcefully advocate his position once he makes his stance clear.

“I’ve got to first decide how I’m voting,” Schumer said.

Opponents have been much louder than supporters. If that trend continues over the break at town hall meetings, it will only amplify pressure on swing Democrats to vote against the deal.