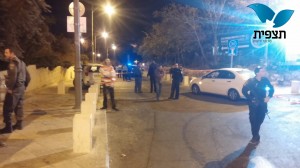 [Multiple videos below.] A well-known Temple Mount activist was seriously wounded in a shooting on Rechov Derech Chevron in Yerushalayim to night and is being treated for serious wounds in Sha’arei Tzedek Hospital.

Rabbi Yehuda Glick, 49, of the Temple Mount Heritage Foundation, was shot at the Menachem Begin Heritage Center. He had been speaking at a Temple Mount and Eretz Yisrael Faithful Movement event held at the center annually.

A Yerushalayim District spokesman said the gunman was on a motorcycle.

CLICK HERE for a video of Rabbi Glick taken just a short time before he was shot.

CLICK HERE for a video of Mayor Nir Barkat reacting to the shooting.

CLICK HERE for a video of MK Feiglin’s reaction.

CLICK HERE for a video at the scene of the shooting.

According to Aaron Adler, a MDA paramedic who arrived on scene, Rabbi Glick was still conscious. “We found a man suffering from a number of gunshot wounds in the upper part of his body. We provided him with immediate medical treatment and admitted him for emergency treatment at the hospital with the victim in critical condition.”

Rabbi Glick is the director of Haliba, which advocates for Jewish civil rights on the Temple Mount. The organization’s mission statement says that its goal is to “bring together a diverse group of Jewish Israeli – secular, charedi, traditional, national religious, men and women – who are united in their concern of the inability of Jews to freely ascent the Mount to pray…”

Israeli Knesset Minister Naftali Bennett responded to the terror attack, commenting that, “an attack in the heart of Jerusalem against a public figure crosses a red line of blood.”