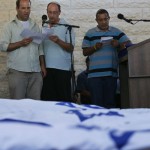 A senior Hamas official admitted that the militant group was behind the kidnapping and murder of three Israeli teens in June. Israel’s Channel 10 aired video of a Hamas official claiming credit for the abduction and murder of Eyal Yifrach, 19, Gilad Shaar, 16, and Naftali Fraenkel, 16.

On the tape, Hamas spokesman Salach Al-Aruri said the group’s military arm, the Iz a-Din al-Qassam Brigades, was responsible for it. The comments were made at the World Association of Muslim Scholars in Turkey. Hamas has previously denied responsibility for the kidnapping which precipitated the escalation of tensions and violence that led to the conflict in Gaza. Read more.