Rabbi Yuval Sherlo, head of the Petachh Tikvah hesder yeshiva and the Tzohar organization, has released a “p’sak” stating that men and women may shake hands because of kavod habriyos and to avoid causing embarrassment.

In his controversial ruling, Rabbi Sherlo stated that if a woman has stuck out her hand, a man may shake it so as not to cause her embarrassment. It is thus permitted, he said, because there is no chibah yeseirah.

Rabbi Sherlo, on his yeshiva‘s website explains the basis for his p’sak, stating that  “the prohibition for a man to shake hands with a woman is not so severe, since shaking hands is not a clear expression of closeness that it should be forbidden,” writes Rabbi Cherlow. “In light of this, there is room to consider whether additional consideration is to be given to allowing a handshake.

“When a person is in a situation where one is reaching out a hand to give shalom, we have to consider the matter of whether kavod habriyos and halbonas ponim (causing embarrassment) override the prohibition of making contact through a handshake. Although some claim that there is no halbonas ponim because one can explain to the person that the Torah forbids one to shake a woman’s hand, still, there is reason to reject this claim, since leaving the person’s hand unshaken will cause embarrassment,” said Rabbi Sherlo

Interestingly, MK Tzipi Chotovli, who is religious, has said that despite the ruling of Rabbi Sherlo, she will continue not to shake men’s hands.

Rabbi Sherlo is not new to controversy. Several months ago, we reported here on Matzav.com that he formulated an elaborate halachic document aimed at facilitating the integration of women into davening services and the life of a shul, while striving for the maximum level of equality allowed by the halacha. Rabbi Sherlo has also made waves when he ruled that a blind person may touch their dating partner.

In the shul plan, Rabbi Sherlo calls for renovating a shul in order to adjust them to women’s davening, to encourage women to dance with the Sefer Torah and allow orphaned women to recite Kaddish alongside men. He also advocates having women conduct Torah lessons to all members of the congregation, male and female alike.

Listen: The 4-Minute Daily Chumash Shiur on Matzav – How Important Are My Actions? 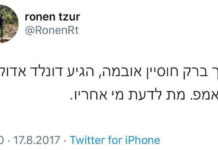 Leave a Reply to against Cancel reply