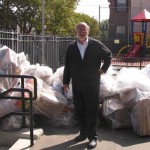 Brooklyn, NY – Assemblyman Hikind (D-Brooklyn) is asking Public School 160 to better manage its piles of garbage, which residents say are destroying their quality of life. The Assemblyman spoke with school Principal Margaret Russo yesterday about the situation.
Residents near P.S. 160 on 51st Street and Fort Hamilton Parkway have been complaining that huge piles of garbage, resulting from the daily meals of nearly 1400 students and faculty, are left out twice each day in front of the school for sanitation to remove at night. The result is an all-day stench that has become unbearable to people living in the neighborhood. The residents say they have been complaining for a long time but nothing has been done so they turned to Hikind.
“Public schools need to work with the community,” said Hikind. “At the request of residents, I visited the neighborhood and I saw with my own eyes-and smelled with my own nose-how bad the situation is. There are trails of wet debris from leaking garbage bags that run down the street and, quite frankly, it stinks. This situation has brought vermin and is destroying the quality of life for residents in the neighborhood. This intolerable situation must be addressed.”
When garbage from P.S. 180 was causing a similar problem, Assemblyman Hikind worked with former NYC Schools Chancellor Dennis Walcott to resolve the matter.
“I look forward to seeing this problem resolved so residents on 51st Street and Fort Hamilton Parkway can return to the quality of life they deserve,” said Hikind.