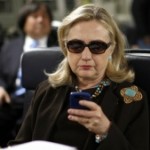 Former Secretary of State Hillary Clinton on Tuesday excoriated Republican senators for their letter warning Iran against a nuclear deal with President Barack Obama, saying they either were trying to help Tehran or harm the U.S. commander-in-chief, Reuters reports.

Clinton, a likely Democratic presidential candidate, said the Obama administration is in the midst of intense negotiations for a diplomatic solution to close off Iran’s pathway to a nuclear bomb and provide unprecedented access to its nuclear program.

“And one has to ask, what was the purpose of this letter?” Clinton said in an appearance at the United Nations.

“There appear to be two logical answers. Either these senators were trying to be helpful to the Iranians or harmful to the commander-in-chief in the midst of high-stakes international diplomacy. Either answer does discredit to the letters’ signatories,” Clinton added. Read more here.