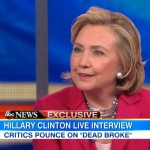 By Moshe Phillips and Benyamin Korn
Much has been said and written about the terror tunnels that Hamas built in Gaza. But too little has been said about who it was that put the cement into Hamas’ hands, thus making the construction of the tunnels possible in the first place.

In a bombshell revelation, Dennis Ross, the senior Mideast policy adviser to Secretary of State Hillary Clinton from 2009 to 2011, has admitted that it was he who was assigned the task of pressuring Israel to ease up on its military blockade of Gaza, in the events after Israel’s withdrawal from that region in 2005.

“I argued with Israeli leaders and security officials, telling them they needed to allow more construction materials, including cement, into Gaza so that housing, schools and basic infrastructure could be built,” Ross revealed in the Washington Post on August 10. “They countered that Hamas would misuse it, and they were right.”

Not that Hillary’s State Department had been acting independently of the White House on the issue of cement. For example, Vice President Joe Biden told interviewer Charlie Rose, on Bloomberg TV in 2010: “We have put as much pressure and as much cajoling on Israel as we can to allow them to get building materials” and other forbidden items into Gaza.

But now that Mrs. Clinton is attempting to distance herself from the president’s debacles in foreign affairs, Ross’s admission shows that it was she who sent her personal envoy to push for a policy that ultimately enabled Hamas to build the terror tunnels.

Israeli officials have long been justifiably concerned about the danger of dual-use items such as cement. On the one hand, cement could be used for innocent purposes such as home construction, in the hands of a peace-seeking, trustworthy government. But in the hands of untrustworthy elements — such as the Hamas terrorist regime that rules Gaza — it could also be used for other purposes. Such as terror tunnels.

President Obama recently remarked, in his much-discussed interview with Thomas Friedman of the New York Times: “Because Israel is so capable militarily, I don’t worry about Israel’s survival.” Secretary Clinton evidently shared that dismissive attitude when she sent Ross on his mission to put cement into Hamas’ hands.

Today, at least thirty-two terror tunnels later, we know that Clinton, Obama and Ross have been wrong, while Israel is right.

Hamas spent between $1-million and $10-million to build each of those tunnels, using as many as 350 truckloads of cement and other supplies per tunnel, according a report in to the Wall Street Journal, quoting Israeli military officials.

And it is “likely that there are additional tunnels” that the Israelis have yet to uncover, according to the Journal’s report.

Instead of lethal purposes, the materials used for each tunnel could have built 86 homes, or 19 medical clinics, or seven mosques, or six schools. But Hamas had other priorities.

And Secretary Clinton consciously turned a blind eye. Just as she turned a blind eye to other aggressive and anti-peace behavior by the Palestinians, such as the Palestinian Authority’s sheltering of known terrorists, its payments to imprisoned terrorists, the anti-Israel and anti-America propaganda that fills the PA-controlled media, and the anti-Semitic hatred in the textbooks used in the PA’s schools.

What are the real-life consequences of ignoring such Palestinian actions? An entire generation of young Palestinians have grown up incited to hatred of Jews and Israel, and glorifying terrorists as heroes and martyrs.

What are the real-life consequences of Mrs. Clinton putting cement into Hamas’s hands? The tunnels into Israel were used to carry out the kidnapping of Gilad Shalit and numerous other attacks in which Israelis were murdered. They were being prepared to carry out a mass coordinated attack on Israeli towns and kibbutzim, this year on Rosh Hashanah.

Imagine a scenario in which a surgeon decided that she wanted to employ a controversial and risky technique. She was warned repeatedly that it was too dangerous, but proceeded anyway and in the process nearly killed the patient. Surely that would be deemed malpractice. The surgeon probably would be barred from ever again practicing medicine.

Secretary of Stated Hillary Clinton committed diplomatic malpractice. Her own top aide has revealed that it was she who put the cement into Hamas’ hands, even after Israel warned repeatedly that doing so was too dangerous. And Israel continues to suffer the consequences.

Lesson twenty-four of the Gaza war: Even as we condemn Hamas’ diversion of cement from the construction of housing to the construction of terror tunnels, let us not forget that it was Hillary Clinton who pushed through the policy that made those tunnels possible.

Moshe Phillips and Benyamin Korn are members of the board of the Religious Zionists of America.