Operation ‘Protective Edge’ has generated various financial challenges for Israel’s economy, as the financial activity slowed down during the operation and the costs of the military campaign will weigh heavily on Israel’s upcoming annual budget.

One of the Israel’s most known financial segments, its tourism, has taken a big hit as a result of the operation. According to data presented by the Tourism Ministry, tourist entries were down by 21% during July, the height of the season in Israel. According to the Central Bureau of Statistics, 218,000 visitor entries were recorded in Israel in July 2014. This number is lower than all the July statistics from 2008-2013.

Nearly all European countries have issued travel warnings, advising their citizens to stay at least 40 kilometers away from Gaza, the range most vulnerable to Hamas rocket attacks, as well as from the Judea and Samaria and the Arab neighborhoods of Jerusalem. The United States also issued several travel warnings urging US citizens to be cautious and avoid “areas of unrest.”

Tourism Minister Dr. Uzi Landau stated: “Israel is preparing for the ‘day after’. The Tourism Ministry is planning to invest in marketing campaigns in target countries around the world in order to encourage incoming tourism.”

The Ministry has already launched a broadly publicized campaign in Israel to encourage internal tourism.

Listen: The Daily “Bitachon 4 Life” Burst of Inspiration on Matzav.com: Is it Possible to Always Be Calm? 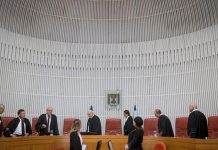