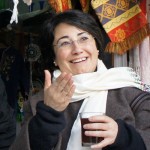 Israeli police say there is enough evidence to investigate Arab-Israeli MK Haneen Zoabi for incitement over controversial statements she made last week about the three kidnapped Israeli teens.

Israeli police received several complaints last week after Zoabi said the kidnappers were not terrorists. Police authorities have passed their opinion to Attorney-General Yehuda Weinstein, who will conduct the investigation.

“They are people that cannot see any way to change their reality, and they are forced to use these means until Israeli society wises up a bit and sees and feels the suffering of the other,” Haneen Zoabi said in an interview on last week with Radio Tel Aviv.

Zoabi, who is a member of the Arab nationalist party Balad, has had a controversial political career. She has been an outspoken opponent of Israel and participated in the 2010 flotilla that tried to break the naval blockade on Gaza.

“I didn’t break any law, rather, I am fulfilling my moral, human and political obligation to fight against oppression and for justice,” Zoabi said in response to the police statement.