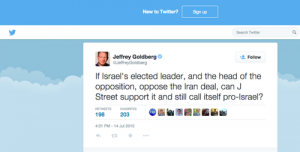 The left-wing Jewish lobby J Street said Wednesday that it is building support for the Iran nuclear deal through a “multimillion dollar national campaign.”

“J Street wants Congress to know that, despite some loud opposition to the deal coming from Jewish organizational leaders, our polling suggests that a clear majority of Jewish Americans agrees with us and backs the deal,” J Street said in its announcement of a campaign “to make the case to lawmakers that the agreement reached yesterday advances both US and Israeli security interests.”

The campaign, according to J Street, “will launch with a 30-second advertisement highlighting the unprecedented inspections and monitoring of Iran’s nuclear and military sites under the agreement.”

Lori Lowenthal Marcus, the U.S. correspondent for The Jewish Press, noted in an article summarizing American Jewish organizations’ reactions to the Iran deal that while every other Jewish group which praised the negotiators who reached the agreement “did so for their (the negotiators’) efforts,” only J Street praised the actual content of the deal. On Tuesday, J Street called the deal “a major step forward that will make the world appreciably safer.”

Well-known Jewish journalist Jeffrey Goldberg, who has gained a large following from his series of exclusive interviews with President Barack Obama on Israel-related issues, tweeted on Tuesday, “If Israel’s elected leader, and the head of the opposition, oppose the Iran deal, can J Street support it and still call itself pro-Israel?” Goldberg’s comments refer to both J Street’s self-identification as the “political home for pro-Israel, pro-peace Americans” and the consensus unfavorable view on the Iran deal among Israeli politicians. In a rare display of cooperation, Israeli Opposition Leader MK Isaac Herzog (Zionist Union) told Prime Minister Benjamin Netanyahu that he is willing to work with Netanyahu’s governing coalition to thwart the nuclear agreement.