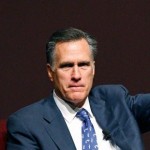 “Do you think Donald Trump’s comments on Mexicans have hurt the Republican Party?” a reporter asked Romney in video carried on CNN.

“Yes, I think he made a severe error in saying what he did about Mexican-Americans,” Romney replied. “And it’s unfortunate.”

“Do you think the candidates should speak up about that?” the reporter followed up.

“I think a number of them have,” Romney replied.

Romney, who wasn’t able to get Republicans to turn out to vote for him in the 2012 election and therefore lost to incumbent President Barack Obama, hosted a slumber party this weekend for two 2016 GOP presidential candidates, Sen. Marco Rubio (R-FL) and New Jersey Gov. Chris Christie.

“Trump’s comments are not just offensive and inaccurate, but also divisive,” Rubio said. “Our next president needs to be someone who brings Americans together – not someone who continues to divide. Our broken immigration system is something that needs to be solved, and comments like this move us further from – not closer to – a solution. We need leaders who offer serious solutions to secure our border and fix our broken immigration system.”

“If Rubio or Jeb gets the nomination, it’s going to be President Hillary and expect a full Supreme Court of Ruth Bader Ginsburgs,” Coulter said in a recent appearance on Breitbart News Sunday. “I don’t think either will get the nomination, but I am sure neither of them will become president.”

As if right on cue after Romney and Rubio, Bush yesterday afternoon joined the coordinated parade of establishment Republicans attacking Trump.

“I don’t think he represents the Republican Party, and his views are way out of the mainstream of what Republicans think,” Bush said in New Hampshire. “No one suggests that we shouldn’t control our borders – everybody has a belief that we should control our borders. But to make these extraordinarily ugly kind of comments is not reflective of the Republican Party. Trump is wrong on this.”