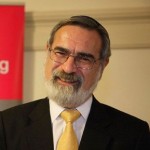 Jewish peers in Britain’s upper legislative chamber, the House of Lords, last night engaged in robust defense of Israel during a four-and-a-half hour debate on the Israeli-Palestinian conflict.

Lord Jonathan Sacks, the former chief rabbi, told the chamber, “at the outset I declare an interest. I am a Jew. Israel is therefore for me the place where my people were born almost four thousand years ago, the place to which Abraham and Sarah travelled, where Amos voiced his vision of social justice and Isaiah dreamed of a world at peace, where David composed the Psalms and Solomon built the Temple – and this had consequences not only for Jews but also for Christians and Muslims, who claim Abraham as their ancestor in faith, and whose God they take as their own.”

Later on in his speech, Sacks declared: “The Islamists also know that the only way they can win the sympathy of the West is by demonizing Israel. They know you can’t win support for ISIS, Boko Haram or Islamic Jihad, but if you can blame Israel you will gain the support of academics, unions and the media and you will distract attention from the massacres in Syria and Iraq, the slow descent of other countries into chaos, and the ethnic cleansing of Christians throughout the region.”

Another Jewish peer, Lord Mitchell, frankly told the Lords: “Around the world, atrocities are being committed and we all wring our hands and do precious little, but when Israel alone defends herself, everybody goes ballistic. At best it can be called hypocrisy, and at worst it is called something else.”

Mitchell added that he agreed with iconic British Jewish actress Maureen Lipman “when she says Labour and [party leader] Ed Miliband have got it wrong.” As The Algemeiner reported yesterday, in an article for the current issue of Standpoint magazine, Lipman, who had a starring role in Roman Polanski’s 2002 film about the Holocaust, The Pianist, excoriated Miliband for his support for British recognition of a Palestinian state independently of any negotiations with Israel.

“I certainly support a Palestinian state, but not quite yet,” Lord Mitchell said. “It must be negotiated with both the Palestinians and Israel.”

Pro-Palestinian peers also made their voices heard. Baroness Warsi, a Muslim peer who resigned from the government in August over its response to the Gaza conflict, said Britain could no longer be considered an honest broker in the Israeli-Palestinian peace process.

She questioned Britain’s response to Israeli settlement building and the humanitarian situation in Gaza and again said the government’s stance was “morally indefensible”.

“It is not in Britain’s national interests and it will have a long-term detrimental impact on our reputation, internationally and domestically. It is time for us to start to be on the right side of history,” she concluded.

Even stronger opprobrium towards Israel was expressed by Baroness Jenny Tonge, who has a long record of inflammatory statements against both Israel and its Jewish supporters abroad. “The propaganda coming out of the Israeli embassy now is to concentrate on Hamas, the so-called terrorists who of course many people in the Middle East see as freedom fighters – we must remember that,” Tonge, who has been nicknamed “Jihad Jenny” in some quarters, told the House.

Tonge claimed that the recent Islamist terrorist attack in Ottawa was Israel’s fault. “It is no surprise either that a recent incident in Canada, and an exposed terrorist plot in Australia, have followed attacks in our country and the USA,” she said. “Both of these countries have unhesitatingly supported Israel with the USA and the United Kingdom.”