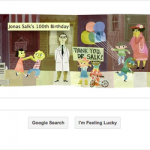 The late Jewish American researcher Jonas Salk, who discovered the polio vaccine, was honored Oct. 28 with a “Google Doodle” for what would have been his 100th birthday. Before the polio vaccine was introduced in 1957, many children became paralyzed as a result of the illness.

Google is known for creatively revising its search engine doodle to match current events. In the Salk image, the researcher is seen surrounded by happy children holding a poster with the wording “Thank you, Dr. Salk!”

Salk famously chose not to patent his vaccine, saying, “Could you patent the sun?” Before he died in 1995 at the age of 80, he had been working on a cure for HIV.