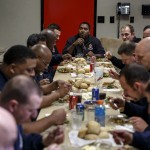 For the fourteenth year, volunteers from Kesher Israel Congregation in Harrisburg served a Kosher Thanksgiving dinner to the city’s on-duty firefighters and police officers at Fire Station No. 2 on North 16th Street.

The meal tradition was started after September 11, 2001, as a way of showing gratitude to the city’s firefighters and police for their willingness to put themselves at risk for the public.

This is the fifth year that city police have been invited to be part of the Thanksgiving meal.

It is also the first year that Capitol Police were invited to the meal.

Included were eight turkeys, stuffing, sweet potatoes, green beans, pumpkin pies and rolls, with all except the rolls prepared by volunteers at Kesher Israel Congregation.

Giant Food Stores on Linglestown Road donated seven of the eight turkeys used in the meal.