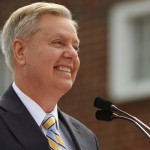 The goal going into the talks with Iran was to dismantle its nuclear program, Sen. Lindsey Graham said Tuesday, but instead, the Obama administration has “ensured they’ve become a nuclear nation” and created a situation that will lead to nuclear proliferation throughout the Middle East.

“This is the most dangerous, irresponsible step I have ever seen in the history of watching the Middle East,” the South Carolina Republican and presidential candidate told MSNBC’s “Morning Joe” program. “You have put every Sunni Arab in a terrible spot … with the passage of time, this industrial-strength program we have locked in place will become a nuclear program.”

In regards to Israel, Graham said, “You have taken their biggest threat on the planet, who constantly chants ‘Death to Israel,’ and you have created a possible death sentence.”

And as for the United States, “you have taken our chief antagonist, people who have killed hundreds of Americans in Iraq, toppled pro-American governments throughout the region, including Yemen, and given them capability to become a nuclear nation.”

Graham blamed the deal on a “dangerously naive” President Barack Obama and Secretary of State John Kerry, who have effectively brought new levels of chaos to the Middle East.

“Any senator who votes for this is voting for a nuclear arms race in the Mideast, and is voting to give the largest state sponsor of terrorism $18 billion,” said Graham. “What do you think they’ll do with the money? It’s going to go to [Syrian President Bashar al-] Assad, to Hezbollah and Hamas.”

Graham said he would have been more open to a deal that tied Iran’s enrichment programs to a change in its behavior, including inspections and finances.

“I would never relieve inspections until there was a certification that Iran is no longer the state sponsor of terrorism,” said Graham, adding that he also would never have agreed to lifting the arms embargo “until they changed their behavior.”

The deal is also a “virtual declaration of war against Sunni Arabs,” said Graham. “You’re making every Sunni Arab nation recalculate. You have locked in an industrial-sized nuclear program on behalf of the Iranians.”

Further, the deal ensures that “every Sunni Arab nation who can get a nuclear weapon will because now they must,” Graham said. “The goal President Obama set out [to achieve] I shared — to dismantle the program, to give them a nuclear capability consistent with a peaceful power program, and to require them to change their behavior before you gave them weapons or a nuclear capability. The goal has not been achieved.”

Instead, he said, “With this deal, you’ve ensured that the Arabs will go nuclear. You have put Israel in the worst possible box. This will be a death sentence over time for Israel if they don’t push back. You put our nation at risk.”

And at the end, “every goal the president expressed two years ago has absolutely not been met, and you put the arms embargo on the table at a time when they’re destroying the Mideast with their conventional weapons program,” Graham said. “This is a terrible deal. It’s going to make everything worse, and I really fear that we have set in motion a decade of chaos.”

Even though the agreement’s details have not yet been made public, Graham said he has been to the Middle East enough to know that the deal is a disaster, as it will “lock in a nuclear program that is mature over time without behavior change because that’s going to push every Arab to get a weapon.”

Graham said he considers Kerry a “good man,” but he and Obama “want a deal so bad” Kerry is not listening to the Arabs or to Israel, as they are “are telling him something he doesn’t want to hear.”

The deal will now move to the Senate for a 60-day review period, and Graham said he plans to argue to his colleagues that it will initiate a nuclear arms race, and that giving Iran cash means “they’re going to put it in the war machine, which puts us at risk.”

Graham also had a warning for Democratic front-runner Hillary Clinton: “If you think this is a good deal, you’re dangerously naive.” But still, he said even she could broker a better deal than the one at hand.

“I think she could negotiate a better deal than this,” he said. “I think everybody on our side could, except Rand Paul.”

And he said that if the Senate cares about Israel, “you will not put her in this box,” and if it cares about the United States, “you will not allow our chief antagonist to become a nuclear threshold nation … If you care about Americans, you will not give this regime one penny.”