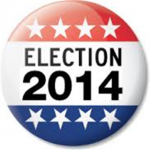 [Last update: 1:31 a.m. EST] We’ll keep you to date on the latest results from the midterm congressional elections and key gubernatorial races throughout this evening.

With control of the U.S. Senate poised to flip to the Republican Party, triggering GOP control of both houses of Congress for the first time since 2006, tonight’s election results have serious ramifications for the political agenda of President Obama, his signature health law, tax policy and stalled economic and environmental issues like the fate of the Keystone oil pipeline.

Meanwhile, future executive leadership of several key battleground states from Florida and Colorado to Wisconsin and Michigan hangs in the balance in close races for governor, an important position two years before the 2016 campaign for the next president begins

1:26 a.m. EST | Polls have closed in Alaska, but it could take days to tally the results of the state’s competitive Senate race.

12:49 a.m. EST | Elise Stefanik, R, is the youngest woman ever to be elected to Congress. The 30-year-old will represent New York’s 21st District.

12:35 a.m. EST | Republican wins Tuesday night extended to executive mansions, even in some of the bluest states. Republican Larry Hogan won in Maryland, and in Vermont, incumbent Gov. Peter Shumlin didn’t win 50 percent of the vote, so the legislature will decide the gubernatorial race. (Democrats control the legislature, so Shumlin will likely hold his seat). And in Maine, controversial GOP incumbent Paul LePage won reelection, beating out Democrat Rep. Mike Michaud and Independent Eliot Cutler.

12:25 a.m. EST | Oregon joins the District of Columbia in approving ballot measures on the use of marijuana by adults, according to the AP. Alaska is also voting on the legalization of pot.

12:14 a.m. EST | The Vermont legislature will pick the governor after neither candidate won a majority, reports the Associated Press.

11:24 p.m. EST | Republican Thom Tillis is the projected winner of the North Carolina Senate race. That means Republicans take majority of the Senate.

11:23 p.m. EST | Mark Shields: Democrats spent a lot of months running away from Barack Obama. Today they ran into him.

11:22 p.m. EST | The challenge for Republicans now: they have to have a governing agenda, an alternative, Michael Gerson tells Judy.

11:17 p.m. EST | From NewsHour’s Lisa Desjardins: It’s looking like Florida will not allow medical marijuana in its state. Arkansas has voted to increase its minimum wage, but not to repeal prohibition.

11:13 p.m. EST | Amy Walter: “The fact that Cory Gardner did as well as he did in Colorado. That has to be something Republicans are very excited about…. This could be eight, nine seats now for Republicans.”

11:11 p.m. EST | From Stu Rothenberg: “Somebody said this was an A-minus for Republicans. What a hard grader… Boy, it’s not just a breeze, Judy. This is a pretty strong win.”

11:07 p.m. EST | This is not a “ringing endorsement” for Republicans; it’s a rejection of the establishment, says columnist Mark Shields.

11:00 p.m. EST | In Wisconsin, Republican Scott Walker is the projected winner, according to ABC and FOX.

10:52 p.m. EST | As of 10 p.m., the race between Democratic Sen. Mark Warner and Republican challenger Ed Gillespie is too close to call. And it’s close enough that it could be weeks before Virginians know who their next Senator is, the National Journal reports in their live blog. Here’s how a recount of Virginia’s Senate race would work.

10:40 p.m. EST | Amy Walter, national editor of the Cook Political Report: It’s tough to win on turnout if “you’re losing on message.” That has been the Democratic Party’s problem.

10:38 p.m. EST | Republicans now have five pickups, just one short of a majority.

10:31 p.m. | A measure to legalize marijuana has failed on the ballot in Florida, the AP reports.

10:30 p.m. EST | Amy Walter, national editor of the Cook Political Report: The fact that Republicans won in a state like Colorado demonstrates that it is not “just another red state victory.”

10:24 p.m. EST | Rick Scott, R, is the projected winner in the Florida Governor’s race, the AP reports. Scott defeated Charlie Crist, who was once an independent, once a Republican. Crist became known in this race for an unusually close relationship with a fan.

10:21 p.m. EST | Republicans are on the verge of winning the Senate. But according to Washington Post columnist Michael Gerson, the GOP’s job is far from over.

10:19 p.m. EST | Republican Cory Gardner is the projected winner in the Colorado Senate race. Gardner takes the seat away from Democrat Mark Udall, in his first race for reelection. That is five out of the six needed for the GOP to gain control of the Senate.

10:16 p.m. EST | Amy Walter, national editor of the Cook Political Report: Good news for Democrats is they held onto New Hampshire, but the “map is still going to be tough for Democrats.”

10:14 p.m. EST | District of Columbia appears to be overwhelmingly in favor of marijuana legalization. However, that ballot initiative may become “tangled up” in Congress, says NewsHour political editor and reporter Lisa DesJardins.

10:01 p.m. EST | So far the GOP has taken four of the six seats they need to take the Senate, with Steve Daines’ projected victory in Montana.

9:59 p.m. EST | In Iowa, it’s an open Senate race to replace retiring Sen. Tom Harkin, a Democrat. State Sen. Joni Ernst, R, is leading in the polls in this race that few believed would be on the radar for Republicans a year ago.

Also, Rep. Bruce Braley, D. He was elected to the U.S. House in 2006, but has struggled on the campaign trail, landing in hot water for dismissing Chuck Grassley, R, the other Iowa senator, as merely a “farmer” from Iowa.

9:56 p.m. EST | We’re all in a state of shock over Virginia, Judy Woodruff says. Mark Warner was projected to win easily against Ed Gillespie. In fact, Real Clear Politics predicted an 11-point lead for Warner, as we reported in The Morning Line on Oct 28.

9:55 p.m. EST | Amy Walter, national editor of the Cook Political Report, says Northern Virginia still has “a lot of votes out” and “we still have a ways to go.”

9:43 p.m. EST | Did Sen. Mark Udall run a blue campaign in a purple state? It remains to be seen, but syndicated columnist Mark Shields recalls Sen. Udall being called “Senator Uterus” by a local Colorado newspaper because of his focus on reproductive rights. “It was hurtful for his campaign,” said Shields.

9:39 p.m. EST | According to CNN and Fox, there will be a runoff in Louisiana where Incumbent Mary Landrieu (D), and Republicans Bill Cassidy and Rob Maness are competing.

9: 35 p.m. EST | If the gubernatorial or Senate candidates in Georgia don’t earn at least 50 percent of the vote, the state will go to a runoff election. That means there wouldn’t be a winner until December, or even January, as voters return to the polls over the holidays.

Depending on how things go in Georgia, a winner will be declared Tuesday night in the Peace State’s closely-contested gubernatorial and U.S. Senate races. Or maybe not until December. Or maybe not until January.
9:28 p.m. EST | We’re still waiting on Louisiana. There, people are closely watching Jefferson County. Incumbent Sen. Mary Landrieu won that county 52 to 46 in 2008, NewsHour’s Domenico Montanaro says.

9:17 p.m. EST | President Barack Obama has invited a bipartisan group of congressional leaders to a meeting at the White House on Friday afternoon, a White House official told reporters Tuesday evening as midterm election results were rolling in.

9:08 p.m. EST | In New Hampshire, this is incumbent Democratic Sen. Jeanne Shaheen’s first race for reelection, having first been elected in 2008.

Republican Massachusetts Sen. Scott Brown. Brown won a special election in 2010 after the death of former Sen. Ted Kennedy. But he lost to Democrat Elizabeth Warren in his bid for election to the seat in 2012.

9:04 p.m. EST | Another pickup for the Republicans: Mike Rounds is the projected winner in South Dakota, FOX and CNN report.

8:53 p.m. EST | In about 5 minutes, polls will close in Colorado, Kansas and Louisiana. We’re watching these races closely.

8:43 p.m. EST | Stuart Rothenberg, editor and publisher of the Rothenberg Political Report: Arkansas numbers are “stunning” and tell you that voters are angry.

8:32 p.m. EST | In Arkansas, GOP’s Tom Cotton is projected winner, according to FOX and CNN.

The Harvard Law School-trained Cotton was elected to the U.S. House in 2012. He’s also a combat veteran of Iraq and Afghanistan.

The incumbent in the Arkansas Senate race is Sen. Mark Pryor, a Democrat, first elected in 2002. Pryor is son of former Sen. and Gov. David Pryor.

8:27 p.m. EST | In Colorado, Incumbent Sen. Mark Udall, D, is in his first race for reelection. He was elected in 2008. Running against him is Rep. Cory Gardner, R, who was first elected to the U.S. House in the Republican wave year of 2010.

Colorado has had just one Republican senator in the last 40 years.

8:26 p.m. EST | Lisa DesJardins, NewsHour political editor and reporter: Arkansas has one of the lowest minimum wages in the U.S., and this midterm election’s ballot initiative is a real pocketbook issue for voters in that state.

8:20 p.m. EST | Michael Gerson tells Gwen and Judy that not having a winner in Virginia at this point is surprising. “That should be more decisive and the fact that we don’t have that news should indicate something.” But Mark Shields disagrees, saying Virginia is always slow.

8:17 p.m. EST | Republicans are up 40 to 37. What does that mean?, Domenico Montanaro asks. So far, Republicans only have one net pickup: West Virginia. Still waiting to hear from North Carolina, Georgia and New Hampshire.

8:16 p.m. EST | Stuart Rothenberg, editor and publisher of the Rothenberg Political Report: Democratic strategy is all about getting voters registered who fit Democratic profile.

8:14 p.m. EST | No Republican senator has held West Virginia since 1942. How did Congresswoman Shelley Moore Capito clinch her victory? It had nothing to do with demographic change, says syndicated columnist Mark Shields. It was a change in attitudes towards both parties, coal and a sense that Democrats “don’t care about white, working people.”