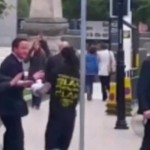 A British man ran straight into the Prime Minister David Cameron during a visit to Leeds, England. The man was arrested, but claimed he was just a jogger on his way to the local gym.

Cameron’s security failed to stop the man until he had charged right into the politician, appearing to shove him deliberately. Cameron was uninjured but the collision has raised serious security concerns.

The local police tweeted later: “Nothing sinister, just a man in the wrong place at the wrong time.” Read more at BBC.