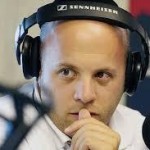 [Update below.] When Israeli broadcaster Menachem Toker received a copy of a new song from Lipa Schmelczer’s B Positive album to air on his radio show on Radio Kol Chai, he made an unprecedented decision not to broadcast it, feeling that it is disrespectful to one of the greatest Torah leaders of the generation, Rav Chaim Kanievsky shlit”a.

The song is called “Buha,” an acronym for the words brachah v’hatzlacha, the general brachah given by Maran Rav Chaim Kanievsky to the many people from all over the globe who visit him for a brachah. Rav Kanievsky is known for his vigilance in regard to speech and will often say “Buha” rather than enunciating the full two words.

The song mentions Schmeltzer’s visits to Rav Chaim Kanievsky, the Tosher Rebbe and the Skulener Rebbe.

The song was composed after Schmelczer visited Rav Kanievsky and asked for a brachah. Rav Kanievsky said, “Buha. Buha.” Not know what it meant, Schmelczer asked one of Rav Kanievsky’s grandchildren, who explained that it stands for brachah v’hatzlacha.

Schmelczer explained that he learned from this how careful gedolim are about their speech and devorim beteilim, “weighing every word uttered and not speaking more than necessary, yet they honor every person.”

The song, however, seemed to cross the line with some people.

“I have been a radio broadcaster for the past 18 years,” said Toker, “and I have never banned a song from my show. As someone who speaks on air to hundreds of thousands of listeners, including tens of thousands of yeshiva bochurim and avreichim, I feel that this song, which can be understood as an attack on Rav Kanievsky, will be received negatively by the audience. I told the managers at the radio station that I mean what I said. I will not promote a song that contains such terminology in relation to one of the greatest gedolei Yisroel, whose teachings and blessings all of Klal Yisroel relies upon.”

The management of Kol Chai has supported Toker’s decision and ordered the station to be firm about not playing the song.

Update: Despite sources earlier indicating to the contrary, Toker now says that Radio Kol Chai, not him, banned the song. “It’s not me who banned it. It was supposed to be on my show today, but they banned it and chose not to play it.”