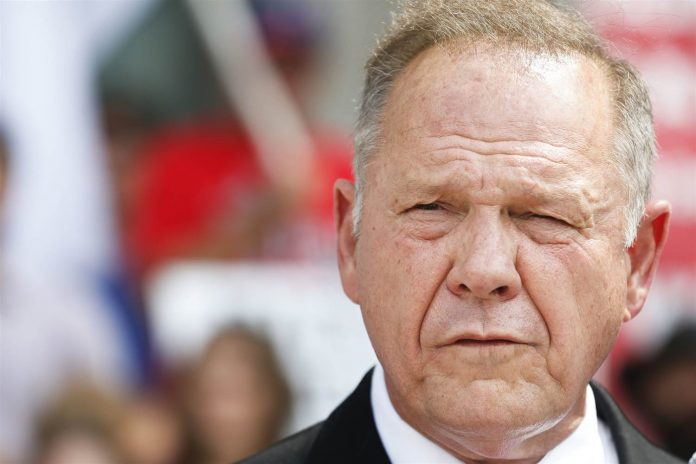 Roy Moore, who was twice suspended from his job as the chief justice of the Alabama Supreme Court, defeated incumbent Sen. Luther Strange, who was appointed to the seat vacated by Attorney General Jeff Sessions and was backed by both Trump and Senate Majority Leader Mitch McConnell, R-Ky.

Moore is now the front-runner to win the seat in a Dec. 12 general election. He will face Democratic candidate Doug Jones, a former U.S. attorney in Alabama.

Former White House strategist Stephen Bannon, who supported Moore’s campaign, predicted that the victory would show that the “populist national conservative movement is on the rise.”

Bannon and other insurgent activists are now likely to turn their attention to unseating Republican incumbents in Arizona, Nevada and Mississippi.

The defeat of Strange, a six-foot, nine-inch former prosecutor and lobbyist, could also put pressure on Republican Party fundraisers, who are counting on high-dollar donors to help beat back anti-establishment largesse. With his victory, Moore became the first Republican Senate candidate since the 2014 cycle to overcome a full-scale attack during a primary from allies of Republican leadership and the U.S. Chamber of Commerce. He also won despite a last minute push by Trump for Strange, including a barrage of late tweets and a rally Friday in Alabama.

The effect the Strange loss will have on Trump is not yet clear, as both candidates in the race draped themselves in the “Make America Great Again” slogans of the president. At a rally on Friday to support Strange, Trump told the crowd, which included many Moore supporters, that he “might have made a mistake” in endorsing Strange. If Moore won the primary, Trump said at the rally, “I’m going to be here campaigning like hell for him” – prompting applause from the crowd.

In the final weeks of the campaign, Moore faced more than $5 million in spending from the chamber and the Senate Leadership Fund, a political committee aligned with McConnell. Republican voters in the state complained of daily direct mail pieces attacking Moore, and one voter outside Birmingham said Tuesday that he had disconnected his home phone in the final days to block a barrage of recorded phone calls about the race.

Jones and Moore will face off in the Dec. 12 general election, though it is not clear whether Jones will make it a competitive race. Alabama last sent a Democrat to the Senate in 1992, when Shelby won on the Democratic ticket.