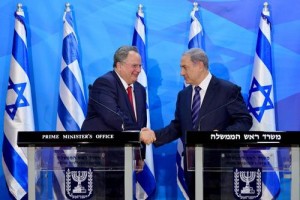 In a referendum on Sunday, a majority of Greek voters rejected the tough economic bailout conditions set by the European Central Bank (ECB)—giving a boost to Greek Prime Minister Alexis Tsipras in his negotiations with the ECB, but stoking more fears that Greece’s banks could collapse, possibly resulting in a messy exit from the European Union.

Netanyahu commended Kotzias for following through on his visit to Israel despite the deepening crisis back at home.

“You come here at a critical time for Greece, and I appreciate the fact that you kept this visit despite some rather dramatic events in your country,” said Netanyahu.

While hailing Greece as one of the two foundations of Western democracy, along with Jerusalem, Netanyahu told Kotzias that Israel is “committed to help in any way we can to ensure your success.”

Netanyahu went on to discuss the recent discovery of five tons of bomb-making materials in an apartment in Cyprus, saying that Greece and Israel are allies in fighting Islamic terrorism.

“We need to cooperate to seek stability, security, peace and prosperity. And these are the subjects that I look forward to discussing with you and so many other things,” Netanyahu said.

Greece and Israel have strengthened ties in recent years as both countries seek to counteract Turkey’s rise in the region.

On Wednesday, Kotzias will meet with Palestinian Authority President Mahmoud Abbas in Ramallah.